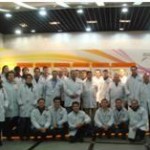 I come back from China with the feeling that I am somewhat late for something. http://www.ie.edu/My attendance to the IE International Update Business in China organised by the Instituto de Empresa www.ie.edu together with the Fudan University www.fudan.edu.cn have allowed me to contact with the urban reality of Shanghai and Beijing.

What can we say about two cities that count with a joined population of around 42 million people, accounting for more than half the population of Spain each? Well, just the truth: they are moving fast, they are learning better and they are constant.

The level of management form Chinese entrepreneurs and executives that I have got to know these days is at the level, if not above, of any western manager, with the advantage that they already are in their reference market. Their mind is open and they are keen on learning and doing things. How many companies have created joint ventures, thinking they were going to get in the Chinese market just like that and are now witnessing how the own Chinese competition, is taking over? To give you an example of what I mean; in the automobile sector, except Honda, all the other western manufacturers were obliged to create associations with local manufacturers with a maximum of 50% of the shares; today, we see how the Chinese manufacturer Geely http://www.geely.com has taken over the emblematic and “safe” Volvo –being this the beginning of what will become a great Chinese player in the automobile sector. It is the feeling that I have been invited to a giant party in a social club, but only while it is the “Happy Hour”, and when you start to get livelier, your time is over. As well as this, the barriers to get into that market and the already-known complex relation with the central government and the authorities (both regional and local), from different cities and districts which any company may find in China, there something else which I consider to be very important and that I would like to highlight: the people. The same barrier which makes it difficult to get in the country is also quite intangible when it comes to proceedings hard. As they say: Everything is possible in China, but nothing is easy”.

When I talk about people, I am talking about the way we interact with each other from two main points of view. One of them: HARD which has got to do with the next forecasts for the labour market in China.

• There hardly is any unemployment.

• There is high staff turnover among qualified personnel.

• Salaries in key positions can be similar to those paid in the west. Those salaries demanded in western companies operating in China are usually higher to those demanded from local competitors.

• The staff avoids making decisions and taking on responsibilities.

• La language: The problem is not that China uses English very little; the problem is that western manager working in China speak nothing (or almost nothing) the different local dialects (especially Mandarin Chinese).

And another one is SOFT, for which finding out I must thank Professor Xiaoya Lang, from the Fudan University School of Management. This is what I have particularly funny and different to our western civilization, especially with regard to the people who get together to do business in China and according to these main issues:

GUANXI (PERSONAL RELATIONS): How to establish relations and links with people from your environment. It is a different concept to the western “networking”, since it is based on information and decision-making power of those people in a business environment, against the Chinese concept, which places people and their social, family and friends circle first.

ZHONGJIAN REN (THE MIDDLEMAN): Chinese people look at westerners with suspicion; they do not rely on them and would rather talk to somebody in between both parties who may offer total trust.

SHEHUI DENGJI (SOCIAL STATUS): Chinese people are very formal when it comes to their social relations. They treat their superiors with obedience and courtesy, especially in public and business meetings.

RENJI HEXIE (INTERPERSONAL HARMONY): Relations with others have to be harmonious and have to avoid conflict.

ZHENGTI GUANNIAN (HOLISTIC THINKING): While westerners do business following a line or pattern which aims at “packing” or dividing by issues (i.e. Prices, guarantee, delivery date, quality,…) to deal with, Chinese people tend to talk about those issues at once, giving the image that nothing is being really negotiated or that the negotiation is not serious.

JIEJIAN (FRUGALITY): China has had long periods of instability and fights. This has taught people how to save in everything and obviously to haggle in everything.

MIANZI (IMAGE): Personal and social reputation is absolutely vital; every detail, even if it is not deliberate, which could end up discrediting reputation can result in your business or relation being split up.

CHIKU NAILAO (TENACITY): Opposite to western cultures, where talent is the key to success, this key in China lies in ethical approach to one’s job and they see ten 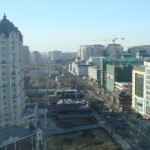 acity and diligence as something very important and honourable.

In conclusion; we have to go there absolutely open in our mind and free from prejudice: it is not the Chinese market the one which has got to adapt to the western way of living, but the other way round. I would also like to make one warning; China is very advanced when it comes to managing the western way, but westerners are not aware whatsoever of the ways Chinese people manage.

Come on and have a great HAPPY HOUR; a Chinese proverb says “one person without smile cannot and must not set up a shop” –this will surely have a reason.

We manage or we are managed
Mario Conde, a way of things…