Lately, as a result of the current economic situation, I have noticed that, amongst some executives and professionals, there is some kind of disorientation about how to face the uncertainty which comes from the current economic situation. This perception is rather tenuous, but I do not want to go over this idea without posing a couple of thoughts t 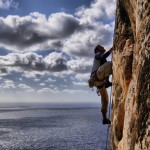 hat may help to dispel it.

The first one is for those executives who feel as if they were climbing a vertical wall, who feel they are alone, who see the summit still a long way up, who look at the ground down there calling them, who feel the weather and the circumstances are not favourable, who looking at both sides, only see partners who have already fallen down, who feel their strength weakens and who start looking elsewhere. I strongly recommend them to see Alex Honnold,  http://natgeoadventure.tv/Post.aspx?Id=24672 ,marvellous, AMAZING solo climbing. There is no more looking elsewhere: we must look up, focus again and motivate ourselves –get it done. Just like Alex does it. Focused, analysing the market, evaluating options and new ideas. He does not climb up a route without having examined it first. Those of you who might think that their situation is just not the same because that wall is not moving and their business situation is pretty dynamic; just think that both cases require doing things in advance.

Executives have to anticipate, find out where they are going and what they want. They have to be able to forecast unknown or unforeseen situations. But, if these situations are not known, how can I forecast them? Well, looking at reality from a different point of view.

There is nothing wrong with going to business schools and doing master’s degrees, but the way of management we are taught is pretty much the same for all of us, and having the same way of facing a problem and solve it. What I mean is; it really is more of the same thing, and that does not work any longer. In solo free climbing, the risk of an accident is very high; you do not know what is going to happen while you are going up. Is Alex Honnold crazy? No, he has just prepared himself mentally and has minimised fear, allowing him to focus on the essential, so he can forecast every next step.

Executives play with a safety net but mentally have to practise solo free climbing and go nowhere but up. We have to forget about others’ recipes and start using or own ones, but using different patterns. We must pose new and different ideas, since our management methods have always been pretty much the same and it is now time to change them. We need to have great self-confidence and self-knowledge; otherwise you would not go up. Dare to do it or someone else will; and remember that you are just half-way up to the top on the wall. GO UP; NO FEAR AND WITH VITALITY.

The second one is for those executives who believe their professional career is over, who feel everything is uphill, who think their former clients and colleagues have stopped answering their calls, who question themselves for not having done this or that, who do not feel that what they had learnt is being given what is worth by the market, who think their knowledge is outdated and who think their future is unclear. I recommend them to take Julián Bernal’s philosophy, www.elpais.es who died at the age of 91 in March; he was just EXEMPLARY. He started practising athletics when he was 78 and he won the 5,000 metres World Championship in his category when he was 86. He got a bronze medal in the World Championship in Italy in the 5,000 metres and who broke the 3,000-metres world record for the over-85’s at the age of 87.

Executives have to know themselves and have to know their limitations and virtues so they can re-invent themselves every single time. Professional careers are long-distance races, with their lateral changes, promotions and demotions. One has to know how to manage it and how to enjoy it. One should not think that it is the end of a stage but the beginning of another stage, which will take us further in our development. Professional careers only come to an end when one wants them to come to an end: START ALL OVER AGAIN –NO FEAR, AND WITH VITALITY.

No fear, and with vitality

The Sea Entrepreneur or The Long Tail Of The Blue Ocean
The “Matthew” effect, Labour Market Reform and Politicians