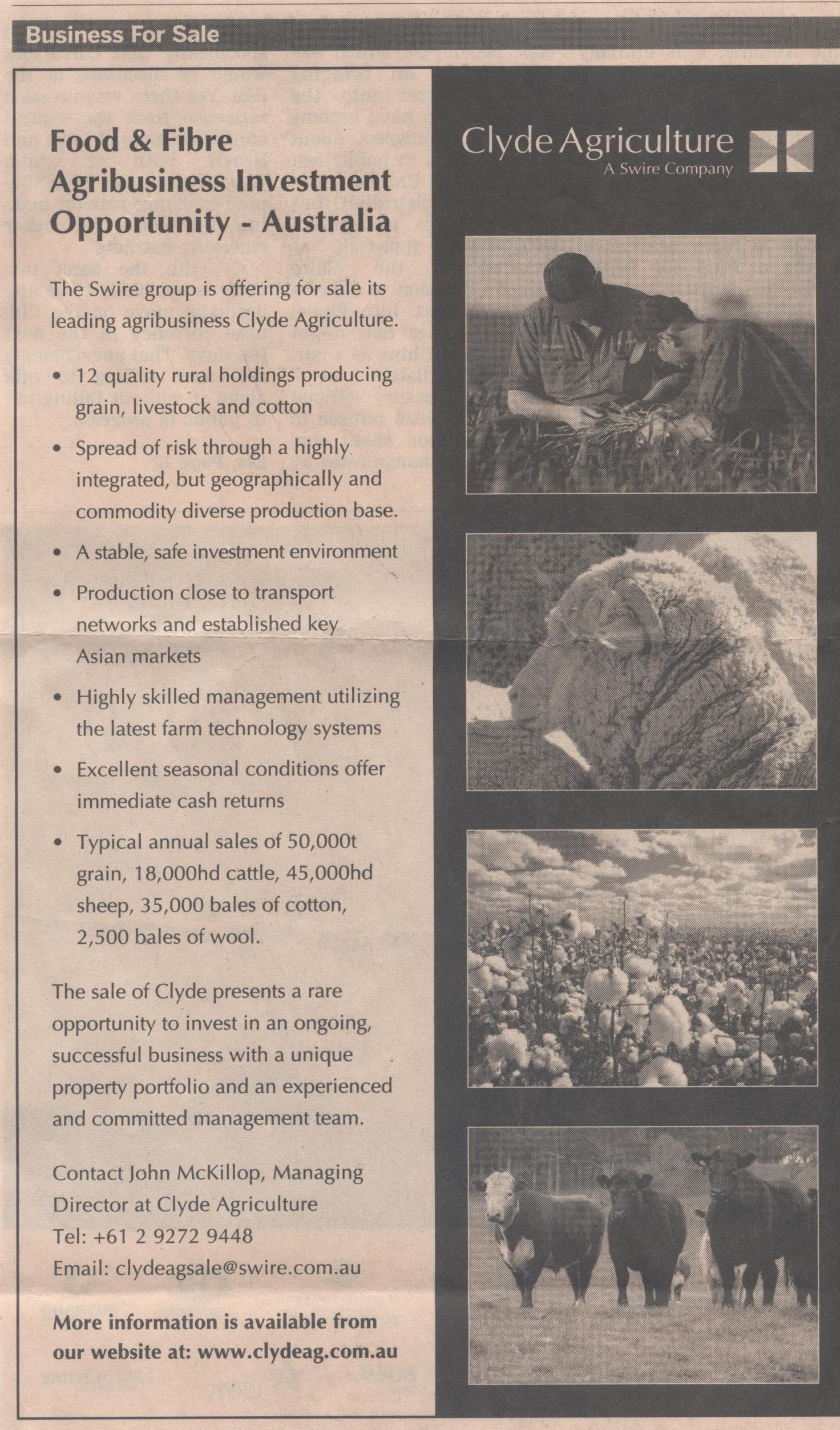 After reading an advert published in the Financial Times at the end of April (see attached and video http://www.youtube.com/watch?v=55CVAtK6v7s&feature=player_embedded ), in which an Australian farm dedicated to food and fibre was being sold –it had the title AGRIBUSINESS INVESTMENT OPPORTUNITY, I felt like suggesting potential investors, as well as suggesting myself, to begin a new adventure in the Antipodes. I do this despite the fact that amongst entrepreneurs here, in Spain, it is much more fashionable to invest in the wine business or the building of wineries.

After all, it is not just the business, but also the romanticism involved. And we will always have the opportunity to write, like Karen Blixen in Out of Africa: “I had a farm in Africa at the foot of the Ngong Hills”.

There are old markets which are still new today. Who said that there would not be any opportunities? These opportunities may not be found in your working field, but in other sectors or locations. This one in particular is the one which has got to do with livestock feeding consumption (for cattle). Opportunities are now in developing countries and the truth is that Australia is just at the right location from all points of view; it is now the second exporting country only behind Brazil. For instance; China is currently a net exporter, but as its income keeps growing, it will eventually need importing.

In accordance with the last and main release made by the FAO in February 2010 “The State of Food and Agriculture” http://www.fao.org/publications/sofa/en/ the growing demand for livestock in several developing countries has been caused by the economic growth, the increase in per capita income and housing development. It is true that forecasts for future world population growth vary, but a recent estimate suggests that the world population will be over 9 billion inhabitants by 2050 (United Nations, 2008). It is also estimated that the growing trend towards urbanization is unstoppable and it was believed that, by the end of 2008, and for the first time in history, over 50% of the population lived in towns and cities and that figure is expected to rise up to 70% by 2050. By then, there will be 600 million less rural inhabitants than there are now (United Nations, 2007).

As stated, the growing income is usually regarded as the main increasing factor in livestock products consumption. It is true that short-term forecasts are not favourable due to the great recession the world economy is currently going through, but medium-term forecasts suggest a recovery. In general, the possibilities to increase per capita livestock consumption are high in big areas of the developing world, since an increase in income leads to an increase in purchasing power. According to OCDE-FAO forecasts for the period between 2009 and 2018, 87% of the world increase in meat production will actually come from outside the OCDE area. It is expected a total increase in meat production for developing countries of 32% over the same period. In 2007, the IMPACT model, developed by the International Food Policy Research Institute (IFPRI) foresaw an increase in the world per capita demand for meat from 6kg to 23kg. All in all; the livestock sector is a market which shows pretty high potential. 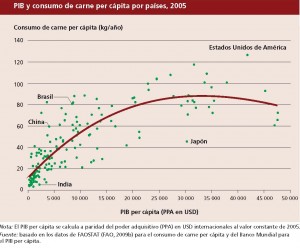 For those of you who do not consider this adventure in Australia, I would like to point out that Europe shows a loss when it comes to production, and needs to increase imports to satisfy its consumption needs. This means that here in Europe, there is a demand which could and should be satisfied from within Europe. By this, we see that business opportunities are also present in high-income countries and in Spain in particular. However, in order to make this happen, governments should foster innovation and groundbreaking agribusiness techniques as well as get rid of unfair competition from other counties’ imports just because they have better customs fees, not to mention less sanitation and production controls in its country of origin. This lack leads to a lower price of those products compared to that of the own national ones and needless to say, this does not appeal to Europeans nor Spanish investors.

Obviously, this growing of the livestock sector will have to be fed and this fact poses yet another opportunity, but we’d better leave that for another time.

Out of Australia, Agribusinesses and Investment Opportunities

The “Matthew” effect, Labour Market Reform and Politicians
The crisis from Banco Santander